Aviatrix Multi-Cloud Networking platform version 6.3 brought a lot of exciting and important features for enterprise customers. It is an action-packed release with great enhancements in Cloud Networking, Security, and Operations areas. This post will focus on GCP enhancements and new features.

Automated and Policy-based service insertion and chaining have always been a real pain point for enterprise GCP customers. Native solutions are not adequate and 3rd party vendors' solutions leave it up to the enterprise architect to figure out the end-to-end solution architecture.

Aviatrix GCP FireNet GCP solves all those challenges and limitations and provides a best practice way to Service Chain NGFW and other services into a cohesive architecture. 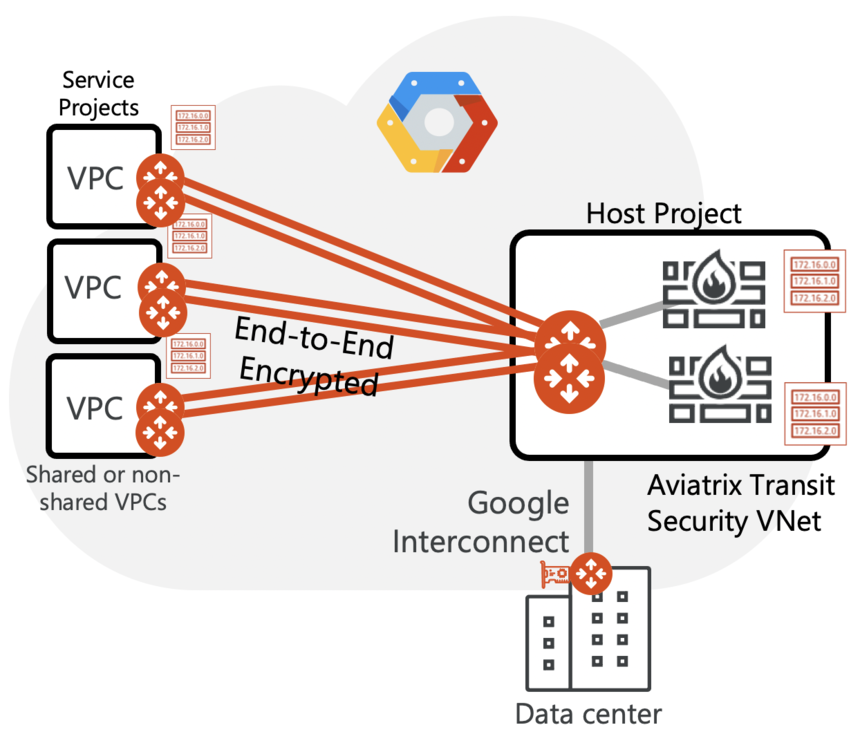 For this customer inspecting ingress traffic for GKE ingress controller traffic was a challenge for GKE workload based on their compliance policies. Following explains their ingress web traffic requirement

This provider processes a large number of image and vidoe scane for their clients. The egress traffic sent to the clients after image/video processing was done must be secure and inspected by NGFW due to HIPPA compliance needs. They were forced to use Active/Standby NGFW due to various limitations.

Aviatrix FireNet solution allowed them to deploy the NGFW in an Active/Active fashion without involving any manual route updates or GCP network tag management. In case of failure Aviatrix FireNet automatically redirected traffic to the available NGFW. This reduced deployment complexity and manual intervention.

The Google Cloud Interconnect (GCI) is a great service to provide hybrid connectivity back to the on-premises DCs. For example, Enterprise can get 10Gbps GCI connections for their on-prem to GCP migration needs. The challenge is that GCI is not encrypted and the native IPSec encryption only provides 1.25Gbps

Following are some of the recent enhancements in 6.3, besides many that were done in prior releases. Some are very specific to GCP and some are available across multiple clouds (AWS, Azure, OCI) including GCP.

Among so many other features and enhancements, taking care of the Aviatrix Platform and its software components is equally important.

With the 6.3 release, you should not see any default service account and API scope should be none for increased security.

Enhancements are added to GCP gateway instance that explicitly opens the default route CIDR (0.0.0.0/0) to all destinations. This helps security and compliance team for audit purposes.

Route based IPSEC with IKEv2

This can now be modified through the Controller User Interface in additional to API and Terraform. One use case of modifying DPD parameters is to reduce tunnel failure detection time. To configure, refer to DPD Configuration.

This is a new mechanism to reduce failure detection time. This is an alternative to the default setting where tunnel status change is detected by a periodic monitoring process running on the gateways. To configure, refer to Event Triggered HA.