What is a VNet?

A Virtual Network, or a VNet, is an isolated network within the Microsoft Azure cloud. A VNet in Azure provides a range of networking functions comparable to AWS Virtual Private Cloud (VPC). These functions include DNS, routing, enabling customization of DHCP blocks, access control, connectivity between virtual machines (VM) and virtual private networks (VPN).

An Azure VNet is a representation of a network in the cloud and is logical isolation of the Azure cloud dedicated to a subscription. In the background, it's a software abstraction of a network that overlays Azure’s infrastructure to provide isolation from resources outside of the VNet, practically making it a private network.

Operationally, a VNet follows common IP routing principles to connection resources inside. So, it needs to have one or more address spaces associated with it (CIDR), which can be segmented into subnets, within which resources will reside. The scope of a virtual network is a single region; however, several virtual networks of the same or different regions can be connected together by virtual network peering as shown below:

VNets can be used to:

Key components of Azure VNets, include:

It is very common, if not ubiquitous, to need to have the cloud resources connect to On-Premises or other cloud resources. This is normally achieved by setting up a Virtual Private Network (VPN) between the two environments. As mentioned earlier, Azure VNet supports VPN connectivity as well. Such connectivity can be built between different VNets, or from a VNet to On-premises as shown in the picture below.

Azure support various VPN modes, such as Site-Site, Point-Site, Policy-based and Route-based. This gives the cloud user flexibility to choose the best option for their tunnel according to their use cases and endpoint devices. There a couple of key components involved in the setup:

For business critical workloads in Azure, many organizations require a private connectivity method with higher bandwidth options along with increased reliability and lower latency.  To meet these requirements, Azure offers customers ExpressRoute circuits which are private connections between the Azure datacenters and a customer’s on-premise infrastructure. 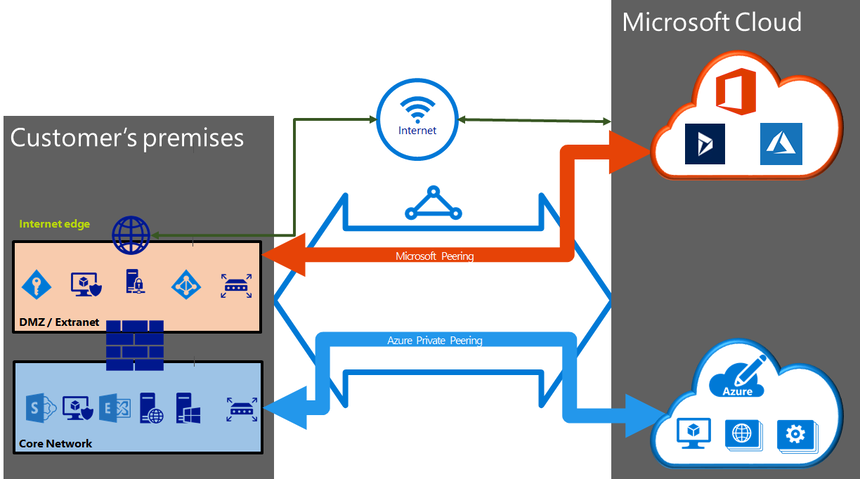 Customers establish connections to Azure at an ExpressRoute location, such as an Exchange provider facility or Network service provider, and create peerings to access Azure IaaS, PaaS, and SaaS services.  For connectivity to VNETs, ExpressRoute private peering is used and the circuit is logically terminated on one, or multiple, VNETs.  This termination occurs using a virtual network gateway in the VNET which is deployed in a dedicated subnet called a ‘Gateway Subnet’.

There a couple of key components involved in the setup: