Please follow Steps 1 to 4 of this blog for SAML integration with Azure AD.

Note:- This endpoint will be under the OpenVPN section of the Aviatrix Controller as shown in the below screenshot. 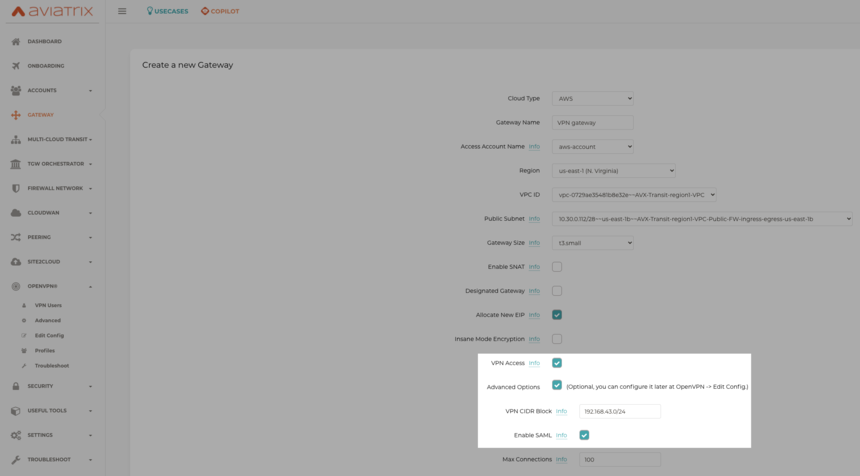 Aviatrix Controller > OpenVPN > VPN Users > Add > Enable SAML Endpoint created in Step 1 above. Optionally we can add a Profile to users which we will later use for access control.

In the below screenshot, we demonstrate a VPN profile enabled on VPN users. 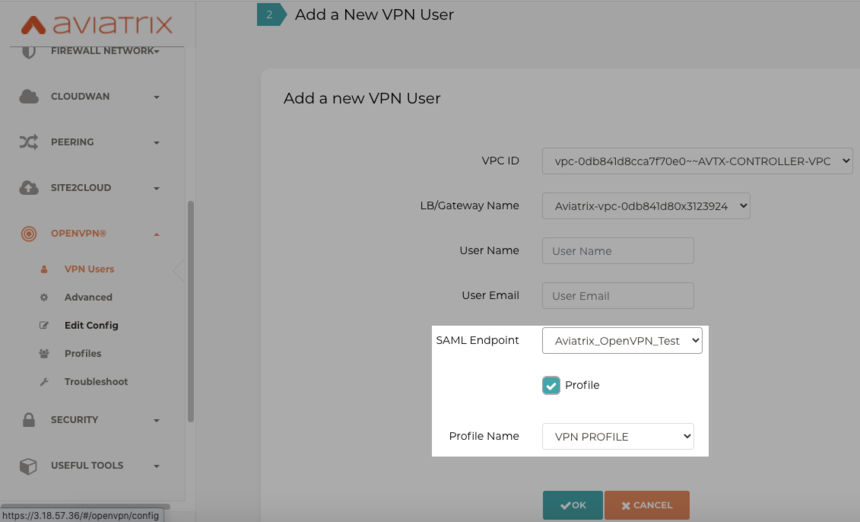 Load the downloaded certificate on the Aviatrix VPN client as shown in the below screenshot. 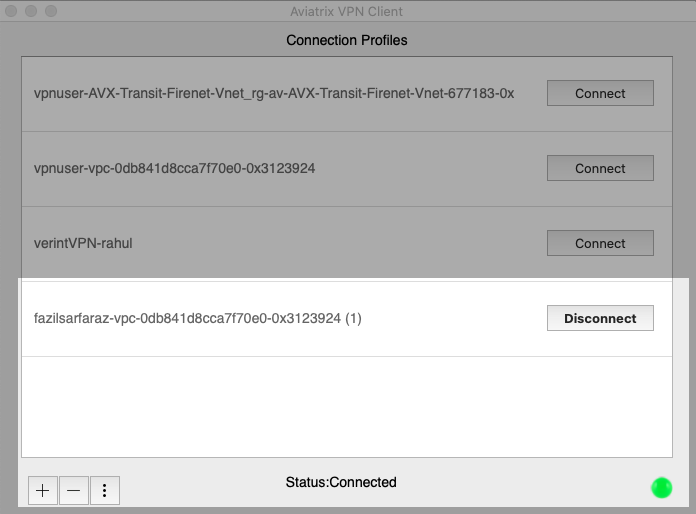 Once VPN user is connected via Aviatrix VPN client. Based on configuration on Step 1, the user will be authenticated by Azure AD and we would be able to see VPN users logged in our controller dashboard. 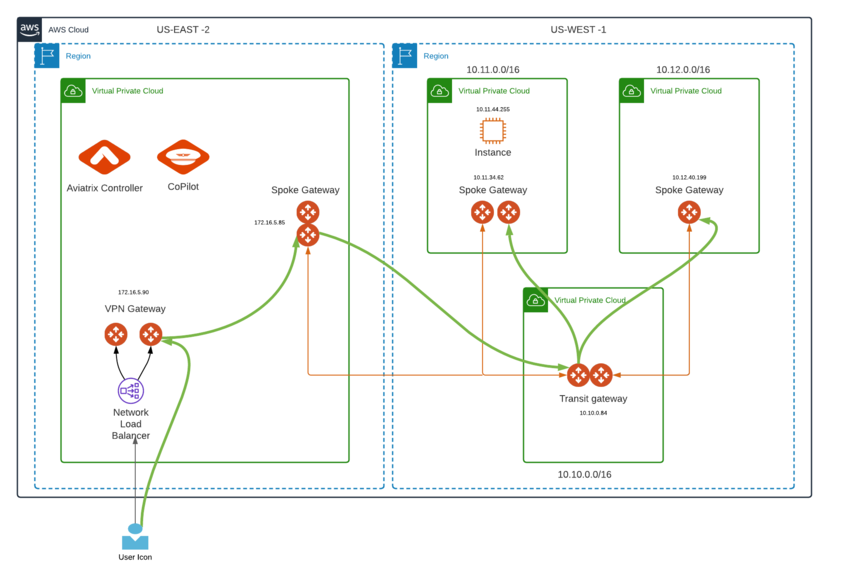 Both Spoke VPCs are attached to Transit VPC.

Now, when a user is connected to Aviatrix VPN client (authenticated by Azure AD IdP), which is installed in local machine. The local machine should be able to reach cloud resources in different VPCs shown in the topology diagram.

From the local machine, you should be able to ping VPN Gateway, Spoke Gateways, Transit Gateway, EC2 instance, or any application deployed in it (as long as the user is connected to the Aviatrix VPN client). 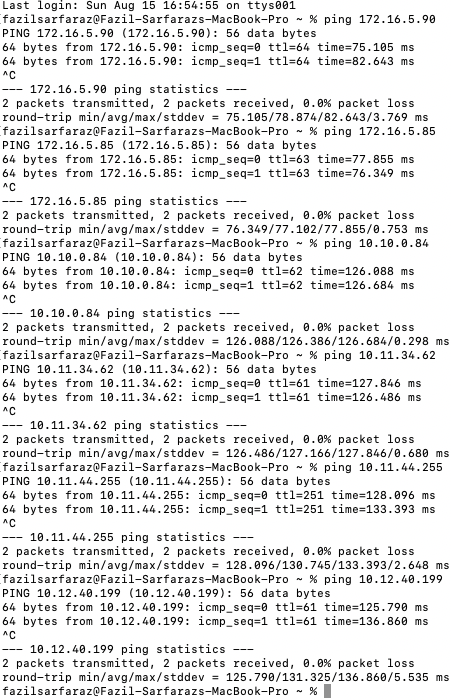 We can define Max number of active VPN connections allowed to be connected to the VPN gateway, enable client certificate sharing so one .ovpn file can be shared with multiple/all VPN users. We can also leverage Split tunnel and Full tunnel modes to control the CIDRs reachability for User VPN.

Full Tunnel - all laptop traffic, including Internet traffic, is going through the VPN tunnel when a user is connected to the VPN gateway.

Aviatrix supports Policy-based access control through which each VPN user can be assigned to a profile which when enabled with appropriate policies controls the user access privileges to network, host, port, or protocol.

Let's understand this by modifying our topology such that the user connected to Aviatrix VPN  has been attached to a profile that denies accessibility to Spoke VPC 2 (10.12.40.199). This is shown by the bold red line in the topology diagram below. 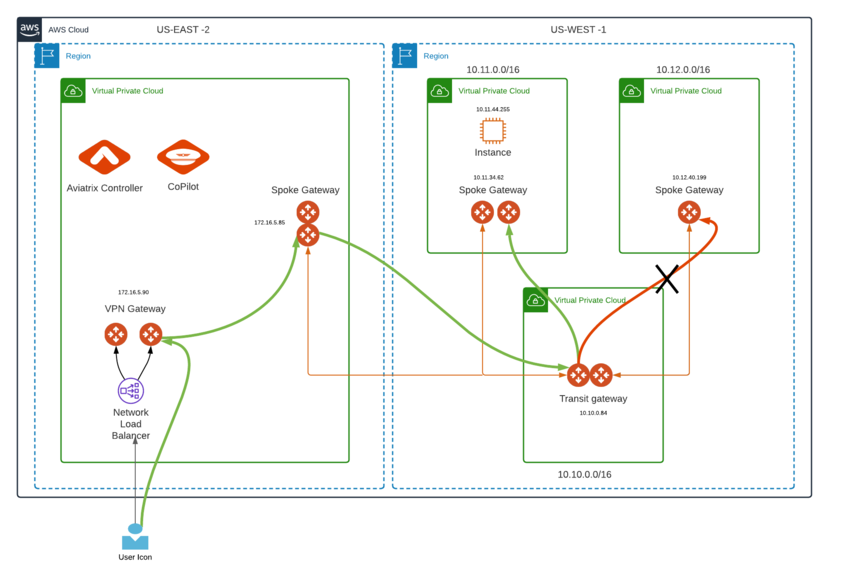 Profile and policies from the Aviatrix controller are shown in the below screenshot.

We are demonstrating a policy that denies ICMP traffic from a remote user under VPN PROFILE to Spoke VPC 2 (10.12.40.199).

After applying the policy shown above, our local machine should reach all the networks except 10.12.40.199 as shown in the topology diagram above.

The access control is dynamically enforced when a VPN user connects to the public cloud via an Aviatrix VPN gateway. 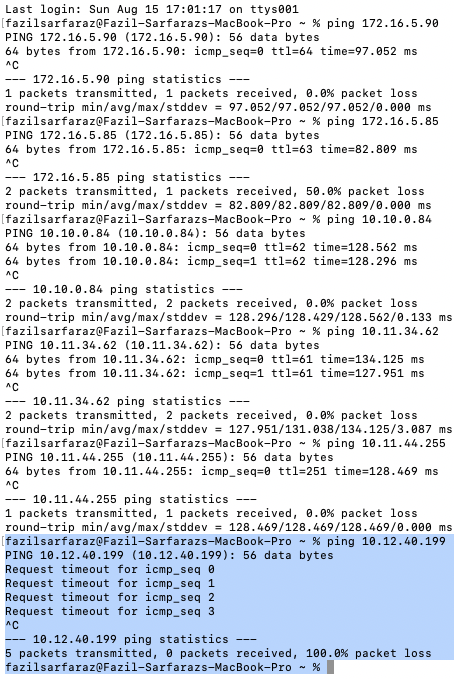 The beauty of the Aviatrix Platform is that it works seamlessly across multiple clouds and the remote users will be able to connect to multi-cloud resources once deployed in the Aviatrix VPN solution and we have transit connectivity across clouds.

As per our topology design, we have transit connectivity from our transit VPC in AWS to our transit VNET in Azure. Once a user connects to our VPN gateway using the Aviatrix VPN client, it should have connectivity to transit and spoke VNET in azure as well as any resources deployed in it. 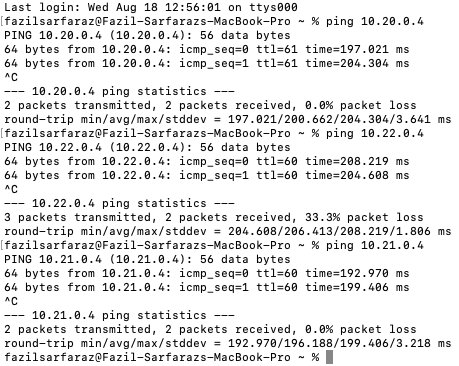