Aviatrix Controller runs and understands various routing stacks. With this knowledge it builds and maintain robust control and data plane (you can think of it as an overlay). It has global knowledge of the entire network in multi-cloud or single cloud deployments.

AVX-CTRL make use of various core routing stacks depending on the use-case and requirements. Following is just an example of where various routing stacks are being invoked. They all work in conjunction of each other. And in most of the cases are coupled with other services such as API calls and cloud native queuing services.

Following are some of the examples

Aviatrix Transit GW peering allows the on-prem learned routes to be propagated to the Transit peering routes along with the AS_PATH information.

With this enhancement, by default the Aviatrix Transit Gateway selects the shortest AS_PATH length as the preferred routes when same route is being advertised from on-prem.

If on-prem (remote site) advertises the same routes (CIDRs) with the same AS_PATH lengths, the Aviatrix Transit Gateway routes based on ECMP.

You can insert BGP AS_PATH on the AVX-TR-GW's customize the BGP AP_PATH field when it advertises to VGW or peer devices.

If you don’t configure this field, AVX-TR-GW only advertises its own ASN.

By default, Aviatrix Transit GW advertises individual Spoke VPC CIDRs to VGW. One can override this behavior by manually entering the intended CIDR list to advertise to VGW.

By default, AVX-TR-GW does not advertise Transit VPC CIDRs

Excluded Network CIDRs is an optional field. When the field is empty, AVX-TR-GW propagates all learned routes from both Spoke VPCs and on-prem across the transit peering.

Using this filter option prevents the overlapped CIDRs from being propagated to the other AVX-TR-GW.

The diagram below illustrates how Excluded Network CIDRs can be used in a two region deployment. In this case, 10.20.0.0/16 appears on both sides as VPC CIDR. To allow Transit Peering to proceed, configure on both AVX-TR-GW to excluded network CIDRs with 10.20.0.0/16.

To exclude multiple CIDR ranges, input a list of CIDRs separated by comma.

Aviatrix Transit Gateway dynamically learns BGP routes from remote site, these learned routes are reported to the AVX-Controller which in turn programs route entries to Spoke VPCs route table. For more details take a look at the following link

Edge Segmentation allows you to specify the edge segments on Aviatrix Transit GW, and which AWS Security Domain each of these segments can communicate with.

This is very powerful traffic engineering option and allows customized summary routes to be programmed in the attached VPC route table. This feature helps overcome AWS  100 routes per VPC limitation. 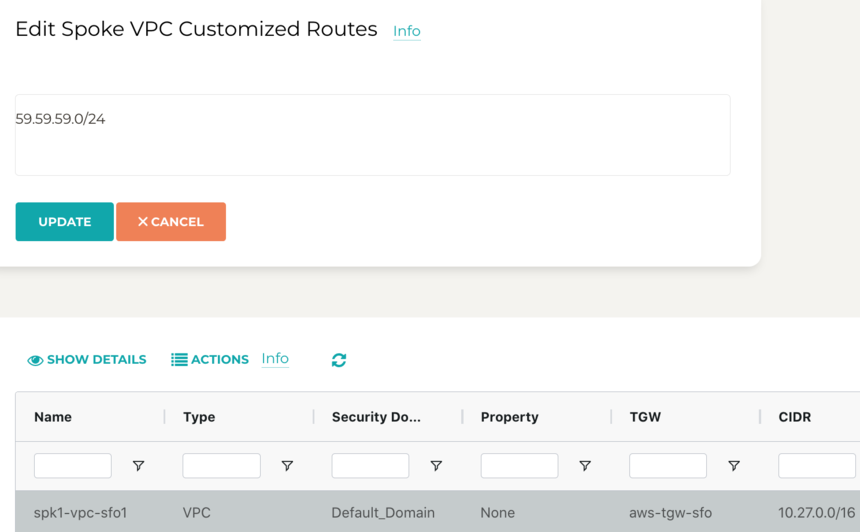 When you customize the Spoke VPC route entries, no learned routes are programmed into the VPC route table. If you wish no route to be programmed by Aviatrix Controller, enter 0.0.0.0/32. 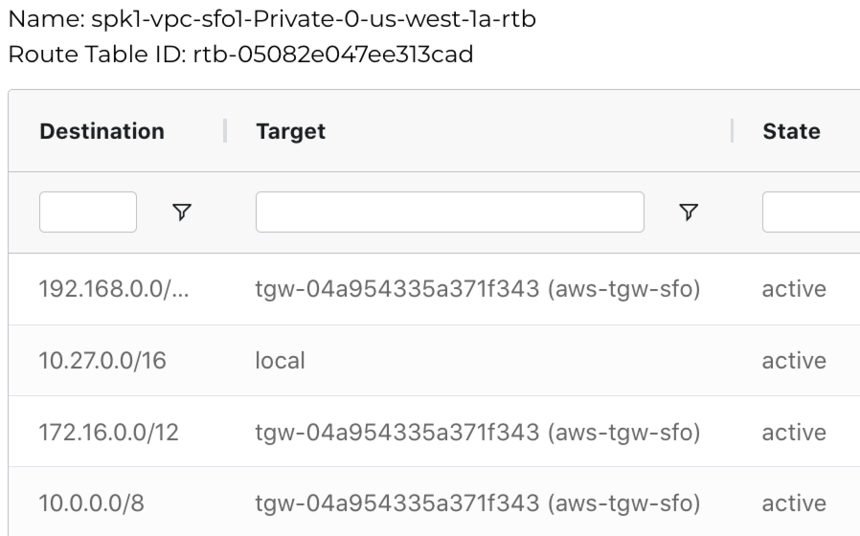 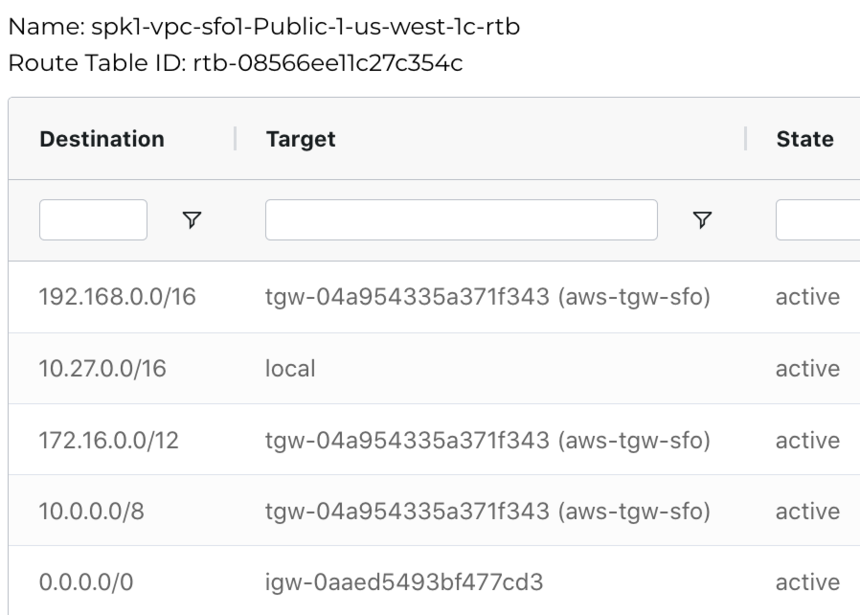 This avoid potential overlapping CIDRs in the environment. For example there are environments where all spoke VPCs have one identical CIDR. Attaching these Spoke VPCs to a TGW will result in error. For example, spoke VPC CIDR 10.27.0.0/16 is common across all Spoke VPCs. By using this feature, the spoke VPConly advertises 10.100.59.0/24 and suppress or filter 10.27.0.0/16 at the VPC level.

When selected, the local spoke VPC CIDR is not propagated to the TGW route table.

AWS-TGW has a some limitations where it does not preserve BGP attributes for the routes it learns from on-prem. This feature excludes the advertisement of certain AWS-TGW attachment (DXGW and VPN) to the AVX-TR-GW.

Consider the following scenario where two AWS-TGWs in two different regions are peered using the AVX-TR-GWs. Here the on-prem site-1 and site-2 are advertising the same CIDR (10.0.0.0/8) with different AS_PATH value to prefer one route vs another.

Since AWS-TGW does not preserve any BGP attributes, by the time it reaches to the AVX-TR-GW, both routes are identical. In order to prevent routing loop, the AVX-TR-GW will reject the peering.